Americans love eating chicken – in fact, we can’t seem to get enough. According to the National Chicken Council, nine in every 10 customers purchase chicken regularly, and every year, Americans consume more than 65 billion chickens.

Our love affair with poultry is also the reason why chicken is the one bright spot in the QSR industry, and is far outpacing every other category, including American mainstays such as pizza and burgers. According to IBIS World, chicken QSR restaurants generated more than $34 billion in sales in 2019, and that growth is expected to continue. Consumer Affairs recently reported in an article titled, “Chicken Envy is Alive and Well in the Fast Food Industry,” that chicken franchises are not only growing faster than other concepts, they are a far more stable investment.

“In a market segment once dominated by Kentucky Fried Chicken (KFC) with only a handful of hopefuls picking up the scraps, there are now 37 chicken-centric restaurant chains and 73 chicken-lickin’ fast food franchises,” the journal reports. “And with a failure rate only in the single digits, life in the hen house appears to be good.”

Americans are Hungry for Something Different

While chicken franchise brands are booming in the United States, they’re not all created equal. Very few brands have the legacy, the flavor profile, the built-in customer base of millions of fans, as well as the proven ability to enter new markets with ease that Pollo Campero does. 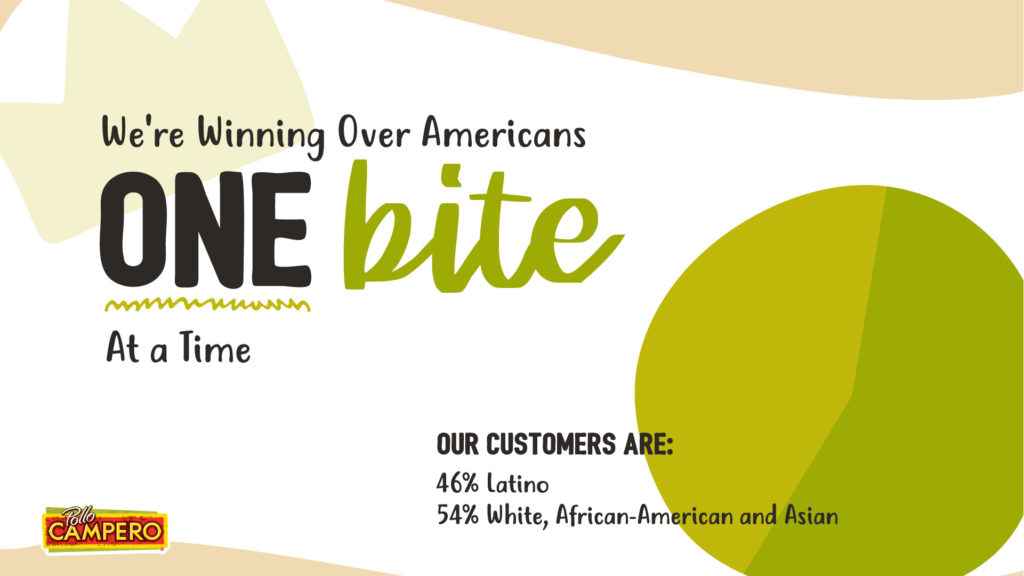 The fact that Pollo Campero is a Guatemalan-based brand, where we have been wildly popular for decades, is a strong differentiator as we bring our franchise opportunity to the United States. The nation is getting more and more diverse, with Hispanics projected to reach 30% of the total population by 2050, and this impact has a tremendous influence on the culture overall. Likewise, the rise of the internet, affordability of travel, and popularity of travel shows has created a demand for new experiences. Thrillist recommended that every American needs to try Pollo Campero, in an article titled, “Why You Need to Go to Pollo Campero, the KFC of Latin America.” The publication says that they “can easily see it influencing the greater culinary landscape in the U.S. to the point where it gets woven into the very fabric of what we call American food.”

Their reason? The food, of course!

“First of all, it is Action Bronson delicious,” Thrillist reports. “The chicken skin is perfectly spiced and crispy. If Pollo Campero sold buckets of fried chicken skin alone, there would be a market for it. But also, the meat is juicy, juicy, juicy. The Campero Beans, which are slow-cooked with chorizo, jalapeños, tomatoes, and onions, are fuego. I like to dip my yuca fries in them.”

Our Crossover Appeal is a Huge Win for Our Franchise Owners

When Pollo Campero opens a new restaurant, it’s common to see long lines stretching around the block of customers who grew up with us in Guatemala and El Salvador. This level of brand recognition is a tremendous benefit to our franchise owners, as they don’t have to win a customer base and wait for people to show up when they open their doors – and in the early months of a business, the ability to make sales can play a key role in whether a business succeeds or fails.

But what makes Pollo Campero truly unique is our ability to expand on our existing customer base of brand champions and appeal to the wider populations of the communities we serve. In fact, in 2020, our Latino customers are the minority, as the majority of our customers are White, African-American and Asian. “The demographics of Pollo Campero have changed,” says Fernando Palarea, Director of Sourcing & Supply Chain with Pollo Campero. “Yes, you have our legacy customers who will drive hours to Pollo Campero, but the reality is we’ve seen more of this crossover consumer than ever before. This is anyone from Hispanic consumers who didn’t grow up with the brand but understand what we are, to other demographics who might not even be able to pronounce the name! When they finally try it, they say, ‘This is so unique, and I’ve been eating fried chicken all my life, but I’ve never had anything like this before’. We’ve done a lot of innovating to ensure that we can attend to the expectations and needs of guests from all over – and we’ve surprised ourselves. We thought it might be limiting to be a Latin brand, but we’re much broader than what we expected. If you’re a true chicken lover, you will fall in love with the product, and you will come again and again because the reality is so huge.”

After 18 years of successfully building corporate restaurants in different markets throughout the United States, Pollo Campero has proven that the concept works and that the demand for our food is much larger than we could have imagined.

Over the past four years, Pollo Campero has simplified the business model, innovated the menu, and has gained a huge crossover audience. This has led to four years of same-store sales increases and a demand from entrepreneurs who are ready to join a brand that is delivering something different. “The growth potential of Pollo Campero is really exciting,” says Blas Escarcega, Director of Finance and Administration with Pollo Campero. “We’re in a great position right now. We’ve been experiencing same-store sales growth the last four years, which is really due to our focus on service, our new business model – which has been extremely profitable for all of us – and the fact that when a customer puts our food in their mouth, they love it. There’s a passion behind this brand. The restaurants that are in the United States are performing very well, and we’ve taken great care to build a team capable of supporting the level of franchise investment that’s necessary to grow the brand. It’s a very exciting time to be a part of Pollo Campero.”

Ready to learn more about our Pollo Campero franchise opportunity?

Fill out an inquiry form on this site and a member of our team will reach out to you to begin a conversation about our unique Pollo Campero franchise opportunity.